The End or the Beginning for Historic Preservation in Bloomfield?

This weekend, several of Bloomfield's most active Facebook pages lit up with the revelation that one of this town's oldest homes had been destroyed. Rich Rockwell, a  trustee of the Historical Society of Bloomfield, posted photos 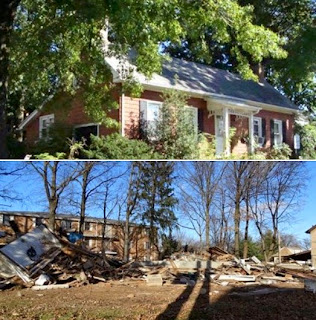 that elicited over 100 responses by shocked residents on several social media groups. Mayor Venezia noted that the action was done without notice or application for permits.

The property at 43 Montgomery St.had been listed on the Multiple Listing Service earlier in the year for 250k, but attempts to show it to Bloomfield representatives interested in preserving it were discouraged. It was ultimately sold outside of the MLS for 212k.

Fines of $1,000/day are being assessed the new owner of the property, but the leveling if this potential landmark cannot be undone. However this was not the last potential landmark to be available for purchase and preservation. A much larger and better maintained historic home is still on the market in Brookdale. Located at 1694 Broad St., it is a stone's throw from the Clifton line which may explain why it was believed to have been occupied by such historic dynasties as the Van Houtens and Van Ripers. 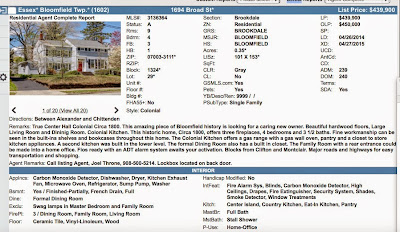 Beginning in January, Bloomfield's Historic Review Board will have expanded powers to consider the landmarking of structures beyond the Historic District.. Residents who have visited historic homes such as Crane House in Montclair and Kingsland Manor in Nutley are well aware of the value of such homes as a hub for community education and pride,

It took the destruction of Penn Station in NYC to create a Landmarks Preservation Commission that ultimately kept Grand Central Station from the wrecking ball. Perhaps the outrage over 43 Montgomery will lead to more successful efforts in preserving and celebrating Bloomfield's history.

It's fascinating to visit this website and read all of your friends' opinions.
While I am interested in the subject of this piece of writing, I am also excited to
acquire familiarity
radmin crack
360 total security crack
snagit crack
dataedo portable crack